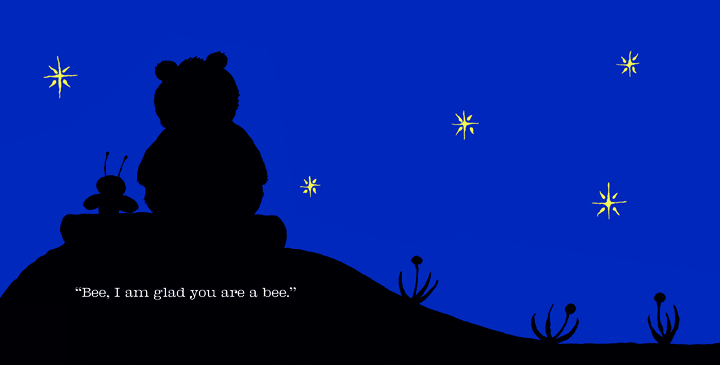 Bear has never seen bees before but he describes them as terrible
monsters. “They are big, and they have large teeth, and they have sharp
claws, and they never share their honey!” Bear learns to appreciate the
qualities of bees (and bears) when he unexpectedly meets one for the
first time. The bee points out that Bear has described himself, leaving
him in despair until Bee reveals his own identity. Their humorous
conversation, which remedies Bear’s prejudice, ends with a shared meal of
honey between two new friends. Digitally colored pen-and-ink
illustrations depict close-ups of the characters against a simple spring
background of turquoise skies, yellow-green grass, and sprightly flowers.
The minimal text is comprised of dialogue between the two characters.
Expressive words appear in boldface type. The starry scene at the end of
the book makes this story a good choice for bedtime as well.­