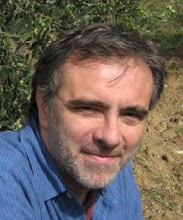 Sergio Ruzzier is a picture book author and illustrator.

In 1995 he moved to New York City, where he’s been creating pictures and stories for national and international magazines and book publishers.

His work has been awarded by American Illustration, The Society of Illustrators, Communication Arts, and The Society of Publication Designers.
He won the Parents’ Choice Gold Medal for The Room of Wonders and for his illustrations for Why Mole Shouted.

He was a recipient of the 2011 Sendak Fellowship.