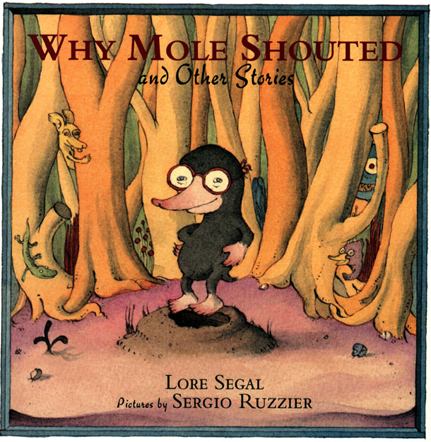 ”Why Mole Shouted and Other Stories,” by Lore Segal, runs in the tradition of
Arnold Lobel’s ”Frog and Toad” stories, or James Marshall’s ”George and Martha”
tales, those sweet, seemingly simple stories of great and abiding friendships.
Children may learn more of friendship from books like these than from years of
painful trial and error. Just as important, they learn that love takes all kinds of
forms, not merely the predictable or traditional ones. [...]
Segal has written versions of fairy tales illustrated by no less a great light than
Maurice Sendak. Here she is accompanied by tender watercolors by Sergio
Ruzzier, in muted shades of blue, green, tan, brown, and orangey-red, with a
dash of lavender thrown in for spice. His pictures are not pretty in any
conventional sense; indeed, they are almost deliberately weird, and the creatures
are homely, if immensely likable. ”Why Mole Shouted” is quietly stellar: gentle,
warm, and witty. It’s a great book for reading aloud, and inviting enough for
early readers. This is another Frances Foster imprint book, which simply means
that the great editor has struck gold yet again.  –The Boston Globe